The second courthouse was to be razed on May 16, 1966.  The evening before demolition, smoke began pouring from the courthouse windows.  Fire Chief Moody immediately sent two tankers and an aerial ladder truck across the street to the courthouse.  When Moody arrived at the scene minutes later, he called in two additional tankers and 15 off-duty firemen.  The fire began either in the second-floor stairwell clock tower entrance or in the adjoining women's restroom.  Chief Moody said, "We have no way of knowing what started the blaze, but we know it started in that area. . . . It was a difficult fire to fight since access to the ceiling area was difficult."  Firemen broke down doors in their haste to enter offices.  They used air tanks and gas masks to withstand the heavy smoke, and one fireman was hospitalized and treated for smoke inhalation.  Firemen poured thousands of gallons of water into the second-floor area where the fire was hottest, causing water damage in first floor offices.  No courthouse records were damaged due to the fireproof records vaults.  The old jail behind the courthouse was unharmed by the fire and continued to house prisoners.  It too was scheduled for demolition and replacement by a more modern jail.

"The Albany Herald described how 'scores of spectators gathered at the scene, and City police blocked off Pine Avenue in front of the courthouse.'"

Administrator Carl Leavy praised the fire department, City Manager Steve Roos and others who valiantly helped fight the fire.  Court Bailiff B. C. Gable and several county jail staff bravely removed books and items from Superior Court Judge George I. Sabados's office.  The Albany Herald described how "scores of spectators gathered at the scene, and City police blocked off Pine Avenue in front of the courthouse. "  The next day, firemen and County prisoners cleaneed up areas blackened by the fire, but officials decided not to repair the damage given the building's imminent demolition.   A temporary jail was built at the county farm. 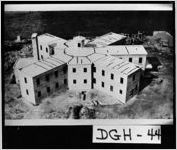 Courthouse offices relocated to the former Army Reserve Armory buildings on Gillionville Road.  Non-jury hearings were held there, while Superior Court jury trials took place in the Federal building's courtroom.  The Albany Herald reported that Odinary Evelyn Courson sought to hold lunacy hearings "that attract a considerable number of witnesses and interested parties" in the Armory buildings.  Most county officials and employees enjoyed their new quarters because they were larger than the courthouse offices.  Some courthouse employees reported that members of the public complained about the new location at the Armory.