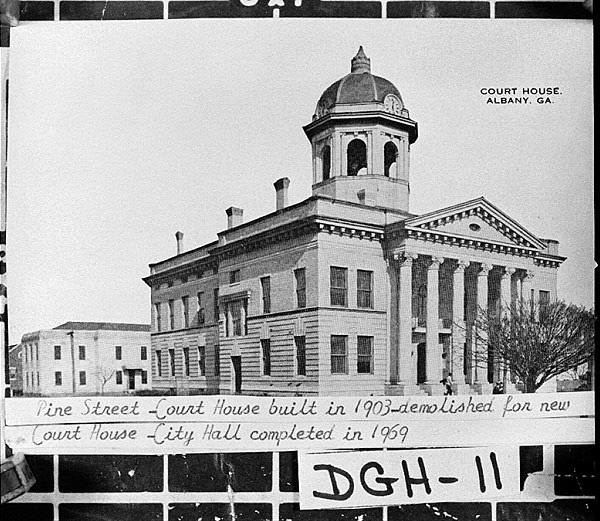 "Plans were being made for the new courthouse as early as 1892."

The second courthouse, a two-story brick building, was built in 1903.  Plans were being made for the new courthouse as early as 1892.  The July 16, 1892 issue of the Albany Weekly Herald published a proposed drawing by Mr. G.L. Norman of Atlanta, whom the  Board of County Commissioners had initially chosen as architect.  The commissioners ultimately chose Lockwood Brothers of Columbus to design the building.  The courthouse was financed by a bond issue of $40,000 and the jail by a bond issue of $15,000.  It was a two-story neoclassical-style building with a basement, built by W.T. Hadlow Company of Jacksonville, Florida.

The courthouse was severely damaged by a tornado in 1940, but it was repaired and used until 1966, when it was destroyed by fire before its planned demolition.  In 1968 it was replaced by the City-County Government Building.