The C.B.King United States Courthouse is situated on the corner of West Broad Avenue and Washington Street in the historic downtown section of Albany. It was named for Chevene Bowers King, Albany's pioneering African American attorney, civil rights leader, and politician.  It is the only Federal courthouse in the United States to be named for a lawyer who was never a judge.

Construction began in 1997 and was completed in June of 2002.  The building was designed by architects at the J. W. Robinson firm.  The 84,000 square foot building's walls are made of Indiana Limestone and Belden Brick.  The rotunda dome is made of copper.  On either side of the dome are copper wings designed by Tom Askin.  Inside the courthouse are the District Court, Bankruptcy Court, and offices for the U.S. Marshals Service, U.S. Probation and U.S. Attorney.  The Albany division serves: Baker, Ben Hill, Calhoun, Crisp, Decatur, Dougherty, Early, Grady, Lee, Miller, Mitchell, Schley, Seminole Sumter, Terrell, Turner, Webster, and Worth counties.

"It is the only Federal courthouse in the United States to be named for a lawyer who was never a judge." 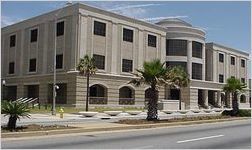 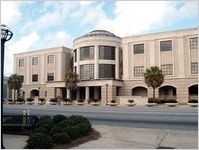