During what was called the Flood of the Century, the Flint River crested at 43.82 feet, 23 feet above flood stage.  Over 5,000 homes and buildings were damaged, and 18,000 families were evacuated.  31 Georgians were killed in the flood, including five Albany residents.  Entire sections of Albany were submurged in as much as 12 feet of the brown water.  The bridges that crossed the river to connect Albany with East Albany were closed.  It took one and one-half to two hours to drive the detour from East to West Albany. 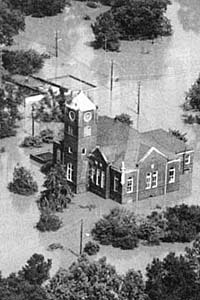 The courthouse closed, but officials were confident that government buildings would not flood and that court dockets stored in the courthouse basement would remain safe.  On Saturday, July 9th, the Albany Herald reported that Chief Judge Asa Kelley had cancelled all court cases until July 18 because flooding prevented many potential jurors from reaching the courthouse.  Judge Kelley said, "They're all on the other side of the bridge.  We don't have anyone to serve on juries."  Jurors scheduled to report on July 11th were excused until July 18th.  Several murder and aggravated assault trials were postponed.  By July 14th an Albany Herald notice stated, "Magistrate, state and municipal courts are closed until further notice."  Judge Kelley excused Superior Court juries and witnesses for the remainder of the July term.  Superior Court did not resume until September 12, but State Court re-opened on July 25th.  The State Bar of Georgia set up a free legal hotline to answer questions, and local attorneys helped flood victims with disaster-related legal issues such as government assistance and flood-induced bankruptcy.

The Dougherty County Courthouse did not flood, but the Baker County Courthouse in Newton was not so lucky.  Despite its location 1,000 yards from the Flint River, the entire first floor was filled with flood water.  After a state inspecter declared the courthouse over 50 percent destroyed, Baker County decided to build a new courthouse away from the flood plain.  The old courthouse was repaired and now houses the county's public library and historical society.