The Nursing Experience at Central State in the Early 20th Century 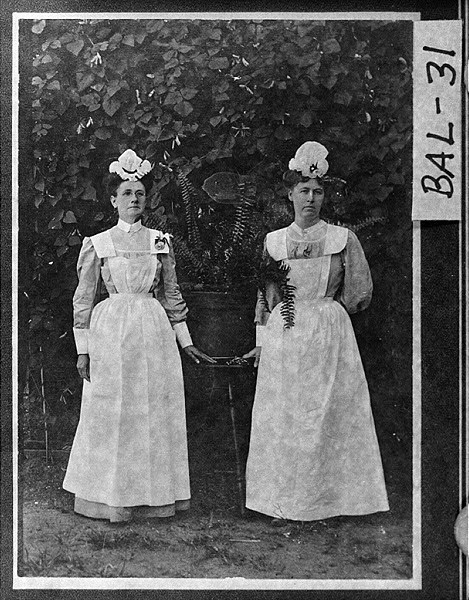 Even though nursing was growing in professional practice and education across the country and the foundation for informal nursing training had been instituted at the Georgia State Sanitarium, as the 20th century dawned, nurses at the sanitarium found themselves serving two roles: that of a nurse and as an attendant. Not only tasked with assisting the physicians with the monitoring of patient conditions throughout the day, thus providing the physicians the ability to keep track of their large number of patients, but nurses also served as housekeepers, scrubbing floors and ensuring the wards were clean and tidy. Additionally, nurses would supervise male patients employed to tend the gardens, dairies, grading, and tasks in almost every department.

Nurses began their day at 5 am, rising with the patients at the blow of the hospital's whistle. Their first duty was to ensure the “feeble and untidy” were bathed and dressed, the “strong and robust” having been taught to care for their own hygiene. The nurses then tended to the rooms and wards with general housekeeping and flushing spaces out with “pure air." The head nurse of each ward would daily document the condition of the patients, any reported accidents, or property destroyed in the ward under their charge, along with requisitions for needed supplies.  These reports were passed to the Supervisors for tabulation into the daily reports submitted to the Superintendent. At 9 pm, after sixteen hours on duty, the day nurses transferred the charge of the patients over to the night nurses, who oversaw the care until morning. The routine would begin again at 5 am, an endless vigil over the patients in the care of the hospital.

“…under the present system, there isn’t much incentive for the young ladies to seek employment here, in the nurses’ department; if there was more incentive to development as a nurse, that would attract more satisfactory classes of girls, and we hope to supply that incentive in the future.” - Dr. E.M. Green

By 1906, the hospital found itself facing a shortage of nurses, stemming from low wages and poor living conditions. The conditions confronting the nurses were not unique to the Georgia State Sanitarium; it is noted in the 63rd Annual Report that other institutions were having difficulty “securing an ample supply of nurses." Without the ability to raise nurse wages, the sanitarium needed to consider other means to attract quality nurse applicants. To address similar problems, peer institutions had established chartered nursing schools that awarded diplomas after the successful completion of a two-year training regime. The Board of Trustees of the Georgia State Sanitarium began lobbying for the formation of such a program in Milledgeville to “dignify the work and so attract a better class of material, which, in the end, would provide the institution with more competent nurses.”

To further address the shortage of nurses, the Board of Trustees began the long fight for funds for the construction of a separate nursing residence hall. The 66th Annual Report of the Georgia State Sanitarium continued calls of attention to the heavy duties required of the nursing staff, stating that the nurses “go on duty at sunrise and remain on until relieved at night.” Since the nursing staff was occupying rooms on the ward floors, they were locked into their rooms at night, for their protection, and then would start the shift again at sunrise. It was noted that “the work at best is not attractive, and this necessity makes it less so.” The Superintendent hoped that the erection of a nursing residence hall would alleviate the stresses and lack of social life in the nurses’ routine, stating that “their wages are small, and such a hall or home appears justly due them.”

“I think if nurses had more recreation, if they had shorter hours for work and could devote their time to study more, it would increase the proficiency of the nurses…they come on duty at sun-up, work all day long, hard- any sort of work, scrubbing, sewing, making up beds, cleaning up wards, looking after the sick-a multitude of various things that occupy their time, and their whole time, and then the night comes, they are half off at night and half on, that is until nine o’clock at night…and those girls, after they have worked hard all day long, and tired out, to go and sit and listen at lectures, you can’t expect for them to absorb very much; the most of the training that they get is the actual training that they get from the bed-side…It is simply remarkable the proficiency that some of them get to be.” - Dr. Y. A. Little

The case for a dedicated nurses’ home was stated more forcibly in the 1913 Annual Report, the Board of Trustee’s writing: 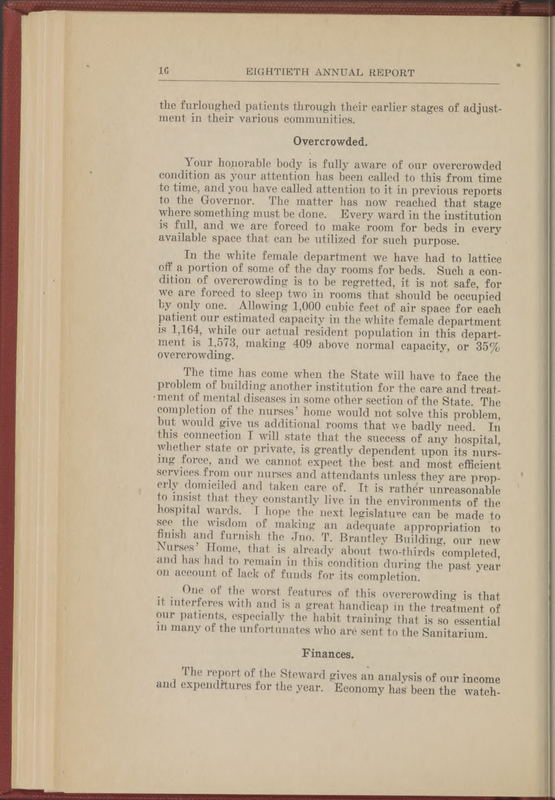 “In the seventy years of its existence it does not appear that the State has ever appropriated one dollar to provide a hall or home for the use of the white, female nurses, and in consequence no such hall is had. Their work is arduous and trying, taxing the body and mind alike, and their physical well-being should be carefully looked after. A place for rest, recreation and sleep when off duty is not an unreasonable requirement and its cost would be abundantly repaid in bettered service.”

The formation of the sanitarium’s nurse training school in 1910 did much to alleviate the shortage of nurses, attracting sufficient numbers to fully staff the hospital. This would be the case until 1917, with the looming entrance of the United States into the First World War, the draft depleted the male attendants and many of the white female nurses were lured away to higher-paying federal government employment. The sanitarium received a state appropriation to construct new buildings on the hospital campus in 1918; two buildings were to be built to alleviate crowding in the Black male ward and white female ward.  Once the new Black male building was built, insufficient funds were left for the construction of the new white female building, prompting the sanitarium’s decision to fund the long fought for nurses’ dormitory, over a decade after the request was initially made to the state. Unfortunately, funds were depleted quickly and the construction was halted by the end of 1920; the sanitarium once again having to request additional funds to make a nurse dormitory a reality. However, looking on the brighter side, in 1922 the last of the nurse quarters received electric lights for the first time.

In 1923, the 79th Annual Report again begs for funding to complete the nurse dormitory. The case is continually made that the new dormitory would help alleviate the crowding on the ward floors by making the current nurse rooms available for patient use. Taking a different tact, the sanitarium declared the building would additionally serve as the headquarters for the Training School for Nurses. It was also put forward that the building would be named for John T. Brantley, in recognition of his long service to the sanitarium’s Board of Trustees. The next year, the 80th Annual Report stated that the overcrowding of the hospital would force the State to face reality, a second institution would need to be built somewhere else in the state to handle the caseload. Building a nurse’s hall, freeing up rooms on the patient’s wards, would not solve this issue, but it would help alleviate some of the stresses on the hospital.

At long last, the year 1925 saw the nurse dormitory completed; almost twenty years after the sanitarium’s first request to the legislature for funding. The nurses were able to vacate the rooms occupied in other buildings, freeing up 198 beds for patients, allowing some alleviation of patient overcrowding.

“This generous recognition of the worth of these faithful employees is much appreciated by them and promises to bring about a still greater improvement in the nursing service.” - Eighty Second Annual Report of the Board of Trustees of the Georgia State Sanitarium, 1925. 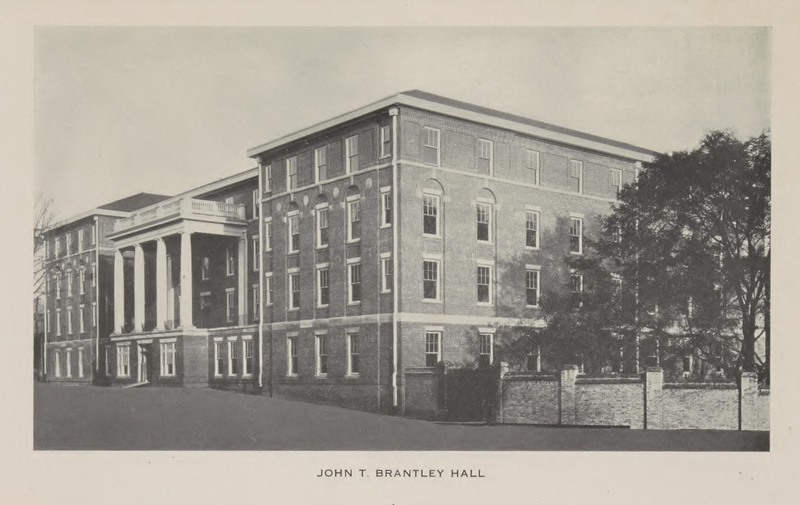