School of Nursing at Central State

In 1907, the Board of Trustees was asked to draw up plans for a training school at the Georgia State Sanitarium. It had been found that the majority of asylums across the nation had established nurse training schools and that these programs improved the quality of care of the institution’s patients. Up until this point, the Sanitarium had been struggling to fill nursing positions, which at times suffered from up to 30 vacant positions in a given department. The school was formally chartered in 1910, with the hopes of the program increasing the number and quality of nurses on staff. To this end, all white female nurses capable of taking the course of study were encouraged to apply to the school. A substantial number of nurses joined the initial class of students, with half dropping out in the first year, however a sufficient numbered remained enrolled. Additionally, two white male nurses expressed interest in the school and were allowed to enroll, leading the sanitarium to request the school's charter be amended to include white males as eligible students.

The nursing school provided instruction through lectures, demonstrations, and practical work within the hospital wards delivered and overseen by the nursing staff and doctors of the sanitarium. The first year of study consisted of 128 hours of instruction in nursing, dietetics, anatomy and physiology, bandaging, emergencies, Materia medica and therapeutics, hygiene and bacteria, and pharmacy. The second year consisted of 144 hours of instruction in medical nursing, surgery, surgical nursing, laboratory, nursing ethics, hydrotherapy and massage, diseases of the ear, eye, nose, and throat, nervous diseases, gynecology, theory of obstetrics, mental diseases, and nursing the insane. This coursework was supplemented with practical work in obstetrics in general hospitals around the state.

The Superintendent of Nurses, A.V. Cross, reported that the first year of instruction was “one of hard and unremitting work, accompanied at times by great mental strain.” Cross would leave the sanitarium, which she had served for 15 years as the Superintendent of Nurses, in 1911 upon her marriage. This is illustrative of the difficulties faced by women in fulfilling professional aspirations amongst the ever-present gender inequalities and dictated societal roles placed upon them. Mae Miesse took over the role of Superintendent of Nurses and would provide leadership to the nursing school into its second year, overseeing the initial graduating class of nurses in 1912. Of the initial nine graduates, which included one male nurse, eight remained in the employment of the sanitarium, filling critical jobs throughout the hospital. At the time of the first graduating class, the school was credited with successfully attracting a sufficient number of white nurse employees to the Sanitarium for the first time in many years.

The training school’s original charter granted successful graduates the right to practice the nursing profession after the completion of the two-year program without going before the State Board of Examiners. However, the State Board refused to register the nursing graduates, stating the law was unconstitutional. All other nursing programs in the state were three-year programs requiring the successful passing of an examination to be registered. Therefore, in 1913, the program was expanded to encompass three years of course work and graduates were required to stand state examinations. The instruction schedule ran from October 1st to June 1st each year and consisted of lectures, demonstrations, clinical lectures, recitations, and practical work in the laboratory and wards. In October 1915, the first graduating class of six nurses successfully completed the expanded training school curriculum and all remained in the employment of the sanitarium filling critical roles on the nursing staff.

The training school played an important role in consistently keeping the sanitarium sufficiently staffed with nurses until 1917. With the entrance of the United States into the First World War, ten nurse graduates joined the Army Nurse Corps, leaving the sanitarium with fourteen nursing vacancies in 1918. The year 1918 also saw the omission of a graduating ceremony for the year’s nursing students due to the influenza pandemic.

In 1919, a provision made it necessary for students to participate in a six-month affiliation with a large general hospital before being eligible for the State Board Examination. The purpose was to provide the students with “a well rounded education and prepares her to nurse all types of illness.” With the dawning of the new decade, the early 1920s found the nurse training school in full swing and once again providing sufficient numbers of nurses at the sanitarium. The sanitarium was able to boast that one of the training school’s graduates scored the highest marks on the State Board examination during the year of 1923. 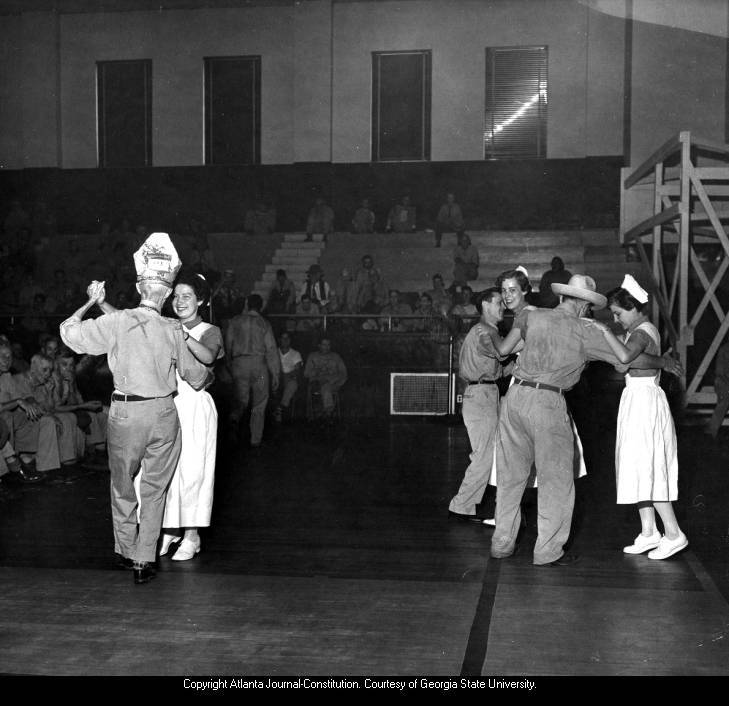 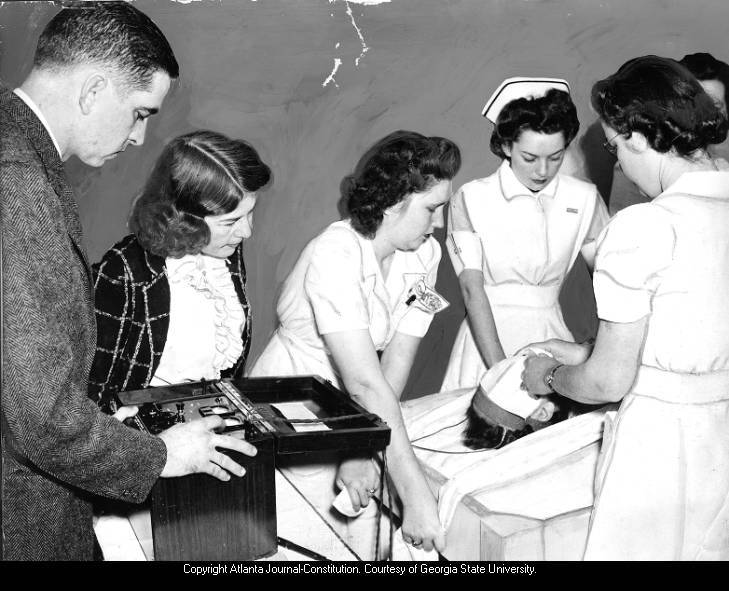 Through the 1920s, the nursing school matured and grew in its capacity and service to the sanitarium. Beginning in 1923, a training program was implemented for all the sanitarium’s attendants. The program consisted of lectures on common issues that arise in the course of nursing people living with mental illness, supplemented with pamphlets with case studies and suggested management practices. The program was informed by one of the graduate nurses, who dedicated a year to mental nursing to compile the information for the training program. The program demonstrated promising results, with patient hygiene improving markedly. The training program for attendants expanded in 1928 to provide instruction on nursing the insane. It was hoped to further improve the quality of care patients received. The institution’s goal was to have each hospital ward under the supervision of a graduate nurse and a graduate attendant.

By 1924, the nursing school was facing no shortage of student applicants, all of which had at least one year of high school, with many being high school graduates, and all were over the age of 21. The Superintendent of Nurses preferred students of this age, finding that they were “more reliable, interested and ethical than younger students.” In July of 1925, the nursing students were able to finally move into their new residence, the John T. Brantley Hall. The Superintendent of Nurses noting that the building provided the nurses time for rest and recreation away from the wards, which improved the nurses' demeanors and performance.

In the beginning of 1926, the Superintendent of Nurses, Mae Jones, was interested in expanding the quality of training provided by the school. Jones recommended the erection of a hospital building with one central operation room, diet kitchen, and laboratory that could accommodate all of the medical and surgical cases of the institution. She believed this would provide patients with better nursing, as well as provide the nursing students with a wider and more practical training regime. Additionally, the training school received accreditation from the American Psychiatric Association in 1926, certifying that the school met the standards established by the Association for training nurses in mental hospitals.

By the end of the decade, the school had raised the educational requirements for acceptance; students were required to have a high school diploma to be considered for enrollment. It was noted with surprise that this increased, rather than decreased, the number of applicants to the school. Interestingly, it is noted in 1928, that despite the school graduating 141 nurses over the past seventeen years, forty percent of enrolled students withdrew from the program before completion of the three-year course of study. The main cause being matrimony. Once again, this pattern is illustrative of the gender inequalities and dictated societal roles placed upon women and its resulting effect on perusing a professional career.

During the 1930s, the school’s program grew, and in order to keep aligned with the requirements of the American Psychiatric Association and American Red Cross Nursing Service, the student’s required participation in an affiliation with a large general hospital was expanded to nine-months, and eventually twelve-months in 1938. Additionally, as the Milledgeville State Hospital and the associated nursing training school grew in importance within the state for the education and instruction in mental health nursing, other training schools for nursing throughout the state relied on the Milledgeville State Hospital nursing training school to provide instruction on mental health nursing. At the same time, classes from state universities and colleges visited the hospital campus to receive clinical instruction in abnormal psychology and allied subjects.

In operation for thirty-seven years, the Nursing School at Central State Hospital successfully formalized and expanded the training regime first instituted at the sanitarium in 1896. From its inception until its closing in 1947, the school graduated 286 certified nurses, who would go on to make an impact in the State’s and region’s health care systems. Following the school’s closure, Central State Hospital continued to provide to the educational process for training psychiatric nurses in the region. Being the only mental health facility in the State of Georgia, the hospital drew nurses from across the state seeking psychiatric nursing training. 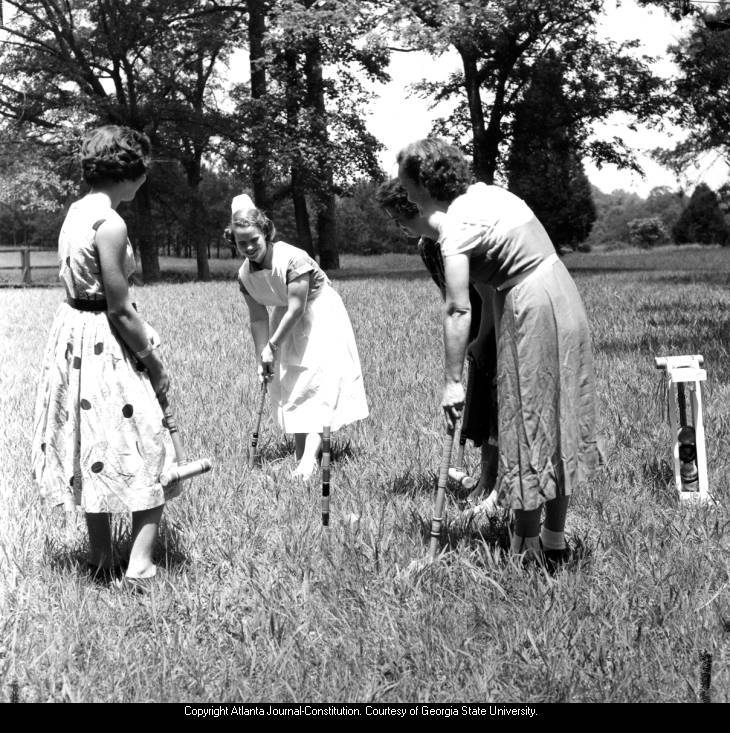 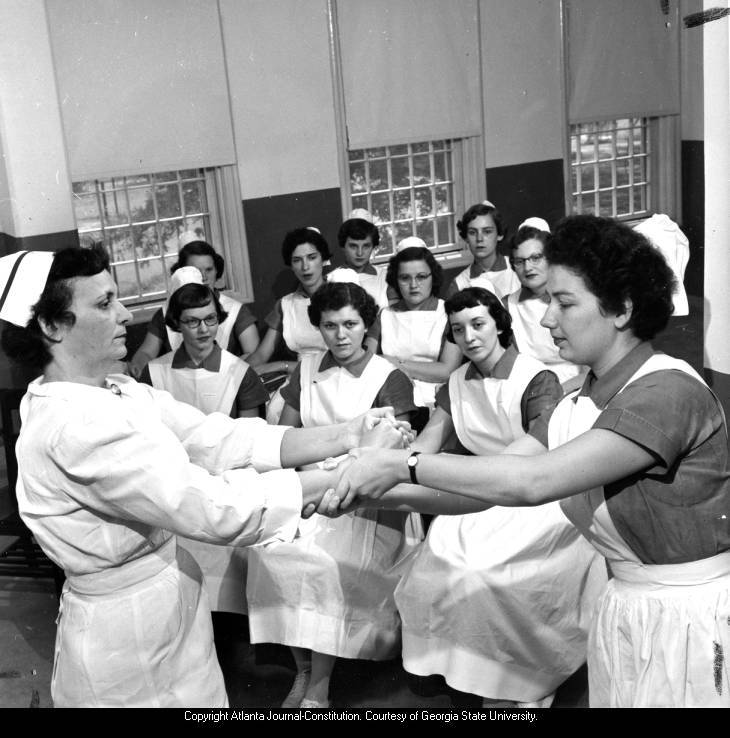 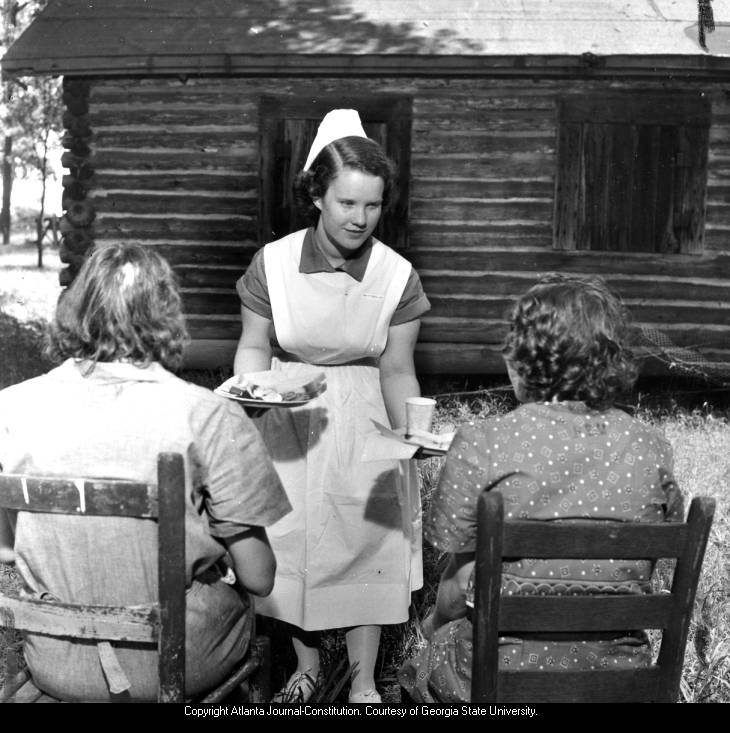 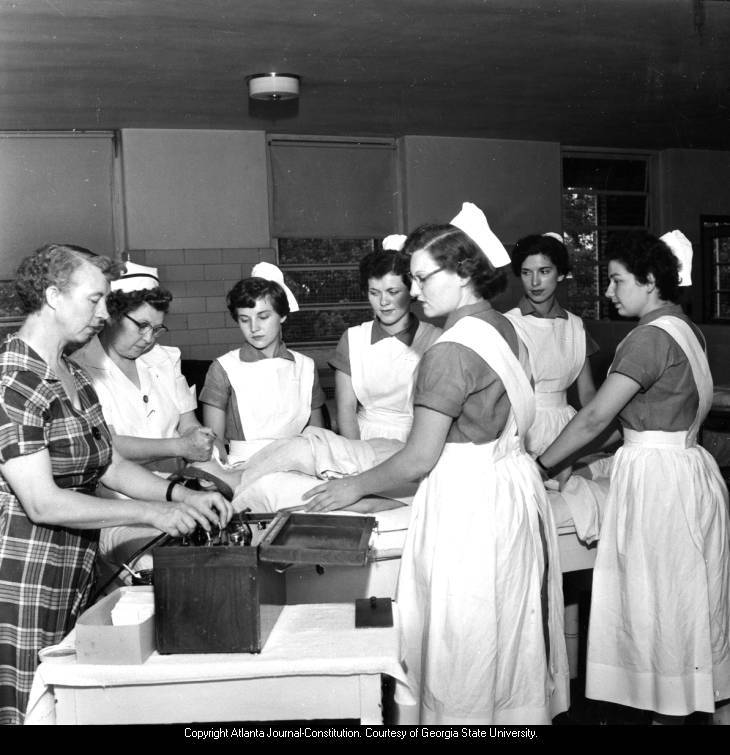 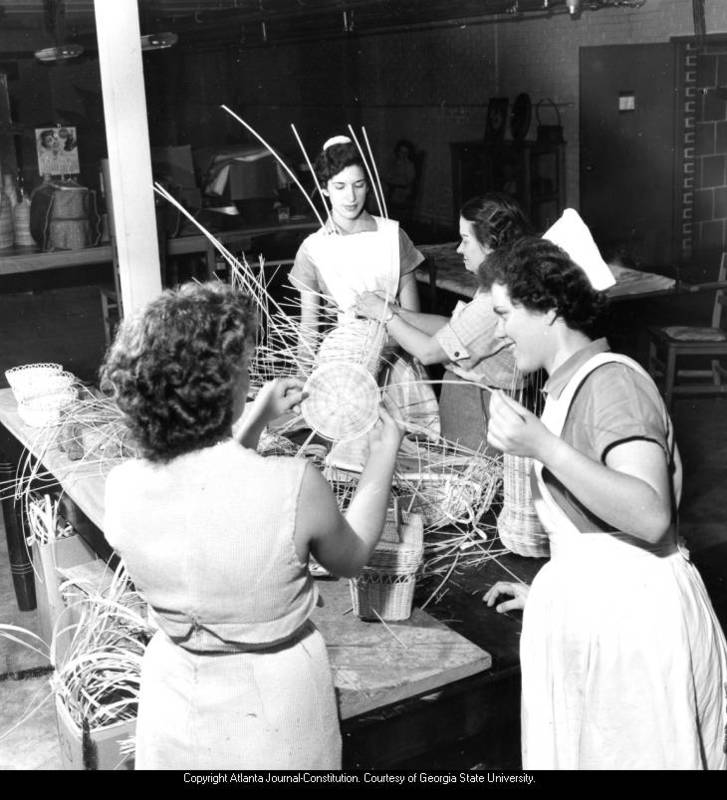 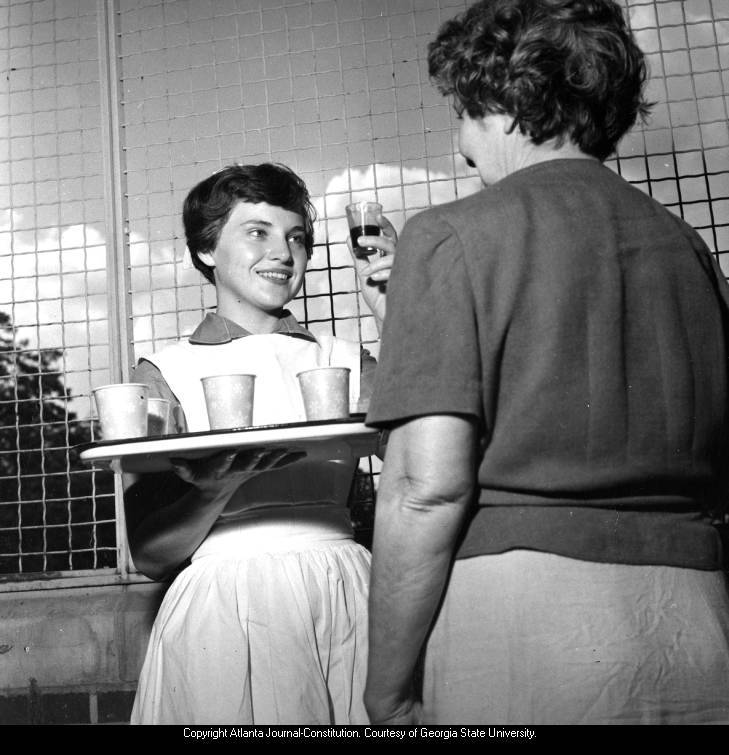