The events that occured in and around Albany's Courthouses demonstrate how the local courts reflected their community and times.  The Flood of 1925 affected other Georgia cities such as Hawkinsville, which saw the Ocmulgee River crest at 36.6 feet .  Tornadoes struck across the Southeast in February 1940, killing 22 people and injuring 330 others.  The courthouse fire of 1966 showed how officials and citizens joined forces to fight the fire and then quickly move court operations to the Armory buildings.  The nationally recognized architects chosen to design the third courthouse followed national design trends and imitated other famous public buildings of the time.  Parrt of the nationwide battle against segregation and Jim Crow laws was fought in Albany's courthouses.  The flood of June 1994 halted court operations for three months.  The way Dougherty County's Courthouses dealt with these events shows how they were an integral part of national and local trends. 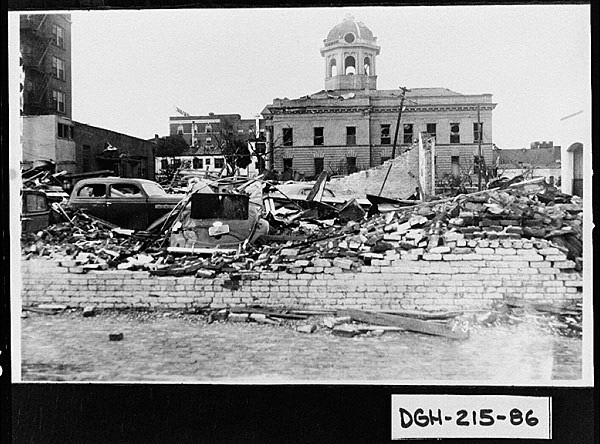 "Tornadoes struck across the Southeast in February 1940, killing 22 people and injuring 330 others."